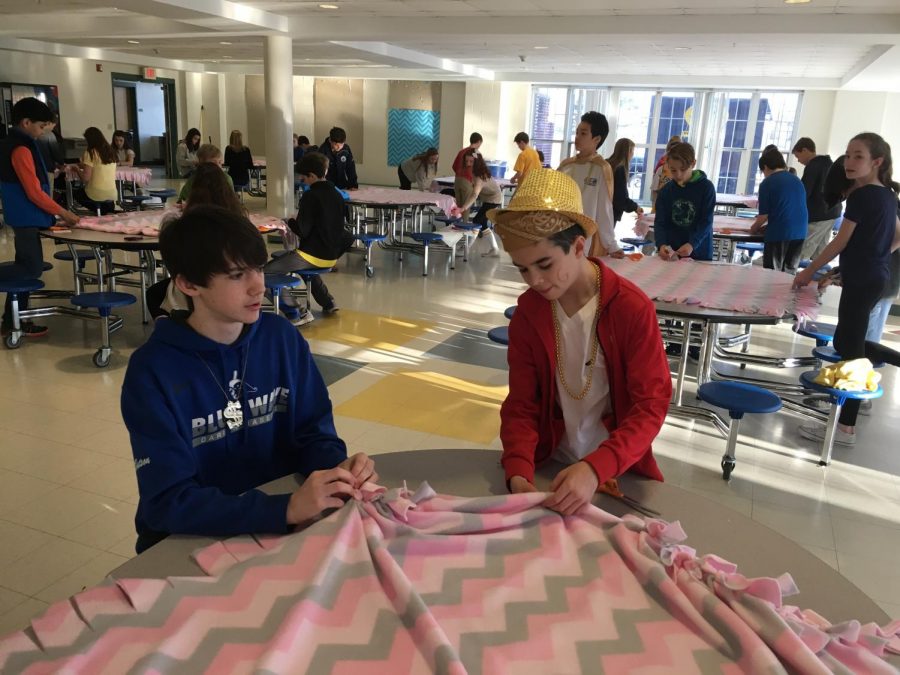 On March 15, 2018, the MMS Gold team participated in their biggest event of the year: Blankets For Preemies!  This event has taken place for 12 years here at MMS, and is organized every year by the Gold team science teacher, Mrs. DePiano.

Mrs. DePiano’s twins were premature babies, and survived the rough road they were taken down.  On the other hand, Mrs. DePiano’s good friend wasn’t so lucky. Her preemie didn’t make it. He passed away from a terrible infection a few weeks after he came into the world.  As soon as she heard about what had happened to her friend’s son, Mrs. DePiano took action.

“I wanted to give back to all the people who have had babies in the NICU,” she told her team on the day she presented Blankets For Preemies.

Mrs. DePiano worked with the Tiny Miracles Foundation to organize a day where she and her students and some parent volunteers would make fleece blankets for babies in the NICU, which would be transported to local hospitals in Danbury, Stamford, Bridgeport, and many more.  The blankets are used to put over a baby’s isolate to keep it dark for them. It’s also a way for parents to know where their baby is in the NICU – by the color or print of their blanket.

The Gold team worked together to raise money to buy the fleece needed to make the blankets.  Their goal was $2,500. Together, the Gold Team raised roughly $1,400 for the project. Mrs. DePiano expressed her gratitude and love for the effort the team put into raising money.

The actual Blankets For Preemies event was a huge success!  The Gold team students, Mrs. DePiano, her kids, and some parent volunteers cut and sorted fleece, made blankets, and bagged them so that Tiny Miracles could transport them to local hospitals.  In all, the team made over two hundred blankets!

“I’m so proud of you guys!” Mrs. DePiano told the team after the big event had come to a close.  “You have no idea how much of a difference you guys have made for hundreds of families!”

Blankets For Preemies wasn’t an ordinary team day.  While regular team days are spent playing games and dressing up in Party City bling, this Gold team event was spent doing something good for the tiny lives in the NICU that need saving.  Blankets For Preemies is a project that will definitely continue at MMS in the years to come.