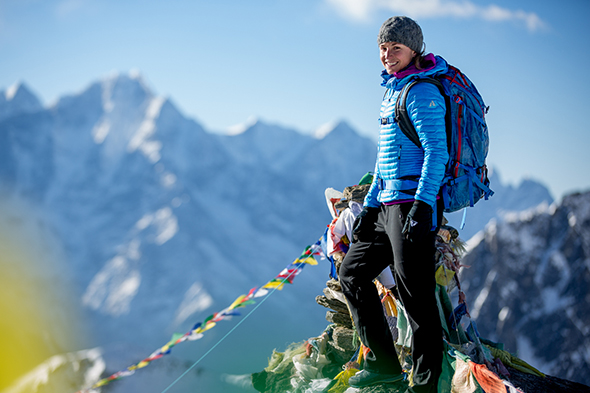 Melissa Arnot Reid is a hiker who has summited Mount Everest six times; one of which she became the first American woman to ascend/descend the mountain without any supplemental oxygen, and she has also created a non-profit organization (which you will find out more about in one of the questions) as well as hiking many other dangerous mountains. I had the honor of asking her some questions.

Kaitlin: How did you feel when you came down from hiking Everest?

Melissa: Very tired and depleted when I climbed without oxygen but every other time I felt so happy and safe to be down.

Kaitlin: Could you tell us about your non-profit organization?

Melissa: Can you look at our website http://thejuniperfund.org/ ? Basically we provide payments to families of Sherpa or high altitude workers who are killed working in Nepal.

Kaitlin: What is one piece of advice you would give to somebody who has the dream to summit Everest one day?

Melissa: Work hard and learn the skills to be safe. Climb many small mountains first.

Kaitlin: I found that you had attempted to summit Everest twice in the past but despite those attempts you got back up again and soon enough became the first American woman to go round trip without supplemental oxygen. What motivated you to get back up again?

Melissa: I was curious if I could do it. I had already summited five times and did not reach the summit on three (other) times, so I was curious what my own limits were and what was possible for me.

Kaitlin: Based off of your Instagram, I can tell that you usually go hiking with someone else. How would you say that being accompanied with another person helps you during a hike?

Melissa: I work as a guide so most of the travel I do is with clients who I am working with, teaching them the skills to be independent. Also, most of the climbs are technical and require rope work and at least two people. But working as a team for one goal is a very rewarding experience.

Kaitlin: Being the first woman to ascend and descend Everest must be a huge accomplishment but do you now have any new goals for yourself?

Melissa: Always! I’m working on the next project. Right now that is mentorship. I work with a number of young girls teaching them about climbing and being a leader in the mountains.