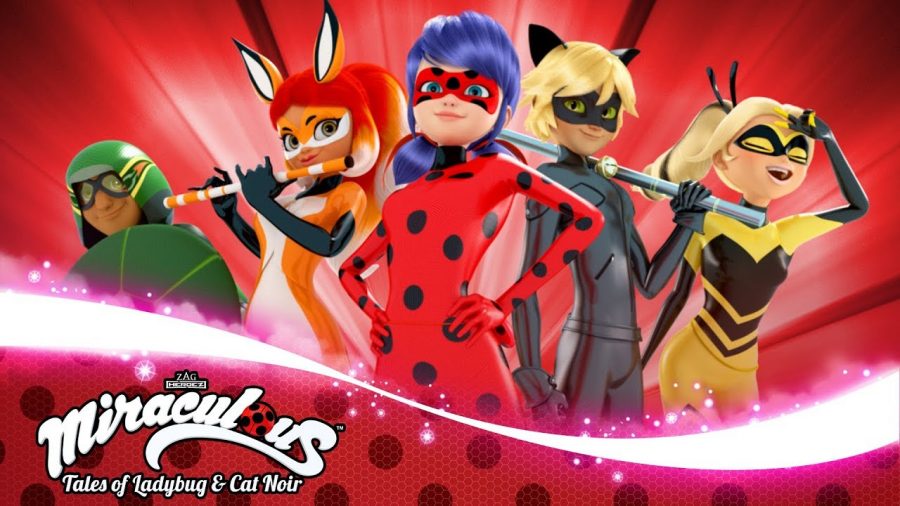 Miraculous Ladybug is on Disney Channel, but it comes from France. You could find it on Netflix, Youtube TV, Hulu, Sling TV, and FuboTV or on cable. The series has three seasons out so far, more coming out soon. There are two series out, the Christmas one, and the New York Special. A little background is about a girl named Marinette Dupain-Cheng, a teenager that’s clumsy and shy, and a boy named Adrien Agrest, a famous fashion model. Of course there are other characters like Alya Césaire, Marinette’s best friend and loves superheroes, and blogs.

Nino Lahiffe, Adrien’s best friend and loves music. Chloé Bourgeois, the daughter of the mayor of Paris and not nice, and many more. One day, a villain, Hawk Moth, akumatized a civilian. Two teenagers will get miraculous. You’re probably wondering ‘what does akumatize mean’ and ‘what’s a miraculous.’ Well first, a miraculous is a magic jewel, with a special phrase and a help of the Kwami, that’s a magic being that helps you to transform, you get transformed into a costume. The magic costume makes you unrecognizable. It also gives you powers, like super agility, but there is a one-time power you can use, when you use it, after a amount of time you transform back into your civilian self. Akumatized is when the owner of the butterfly miraculous (in this case, hawk moth) evilizes one of his white butterflies, or Akuma’s.

You can tell it evilized if it’s black-purple. If a person is feeling a negative emotion, the butterfly goes into an object that the person is touching, for example if someone was holding a pencil, the Akuma would go in that. Then a butterfly-like shaped thing would go around that person’s face and the miraculous holder would be able to talk directly to that person. If the person gives in, which almost always happens, their bodies get covered in purple and black, transforming the person into a super villain.

The next season is rumored to be out around September 2021. Overall this show is filled with action, drama, cringe, shipping’s, and is funny. I bet you have some questions like, “who is hawk moth,” “how did they get there miraculous,” “are there more miraculous,” or “who are the superheroes.” Plus, if none of this seems questionable, I promise there’s more twist to come. In my opinion, miraculous is an amazing action filled animation. There are a couple filler episodes but it is an amazing show. Their character development, backstories, new character, amazing characters, and characters you love to hate. There’s amazing ships, such as LadyNior, Adrennte, MariChat and many more. You may be wondering who those people are, but to know and see all this unfold, watch miraculous ladybug!